On all of the Apollo cameras used to take pictures of the moon landing there is a + in the middle of the lens to help with distance but on some of the pictures objects overlap the plus.

This suggests that the plus was added later. 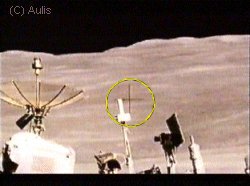 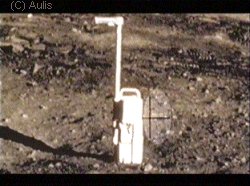 But the answer for this is simple.

If you notice, all of the overlapping objects are bright and white. Because of this, the colour background bleeds into the thin cross, making the cross fade/disappear.

The two images below especially show that if the plus is on a bright colour photograph, then the plus disappears. 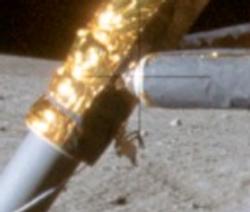 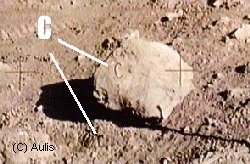 But there is still one problem with one of the Apollo moon photos, on the bottom left corner of a photographic, there is a moon rock with the letter c ‘engraved’ on it. What more, the letter c is commonly used on movie props.

But again! There is a answer. For a start, if NASA really did use the alphabet as coding for movie props, then NASA would be limited to only 26 props, which on a ‘set’ as big as the moon landing would seriously limit a billion dollar funded project. What’s more, the photographic negatives, and the smaller prints of the same photo doesn’t show the letter C.

If you zoom into the C you can see a shadow on the top bit of the c. This suggests that the c wasn’t flat on the rock. You can also see, that the c is a different colour to the rock (a dark yellow).

This points to a bit of fiber or hair, which dropped onto the smaller image when it was being enlarged. (Special thanks to lunaanomiles.com).