Another problem with the moon landing photos can be seen in the next two Apollo images below.

Several astronauts seem to be lit up, as if they were standing in a spot light, even though they are in a large shadow on the moon! 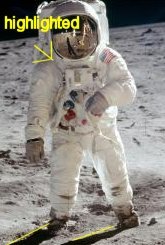 Many moon landing hoax debunking theories have been made to explain this. The most popular explanation is the Earth gives off its own light that highlights the astronauts. But if the Earth gave off that much light, then a shadow would appear behind each person, and there would be multiple shadows in every moon photo. The Earth does give off some light but not enough to hi-light.

Instead, this anomaly is due to the reflectiveness of the moon. The sun light hits the moons surface, and reflects onto the astronaut ‘hi-lighting’ him. 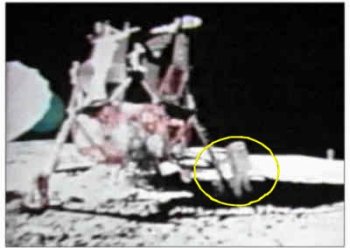 This also happens on Earth. When you wear a white top in the sunlight, – even if you have a cap that forms a shadow – your face will still be lit up by the reflective sun light, when it hits the reflective surface of your white t-shirt.

Conspiracy believers also think that many of the moon landing photos have been doctored. This is because the quality of the photos are constant with every picture. All of the photos are focused and every thing is in view.

This at the time was a remarkable feat, as the cameras were attached to the astronauts chests (see next image) so the astronauts couldn’t see where they were shooting on the moon or whether the picture was focused properly.

If this was true then it would be suspicious. But simple sifting through files shows the real story. NASA wouldn’t print a moon photo took by Buzz if he chopped off the top of Neil’s head. And it definitely wouldn’t appear on the cover of The New Scientist magazine.

At the time it was costly to develop photos, so NASA wouldn’t waste money on faulty photos. 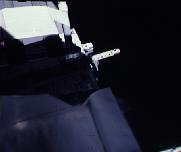