Moon landing photographs are the main argument for the Apollo conspiracy believers, as there are thousands of moon photographs that have anomalies on them. (i.e.: different directions on shadows, things ‘highlighted’.) Because of these anomalies, the photos are believed fake by the conspiracy followers. These people reason “why create fake photos of something that really happened?”

l. The moon landing was faked.

2. Aliens are on the moon, and are seen on many of the photos and have been replaced with fake ones :)

The most constant argument that the moon landing photos (and the videos) are faked is simply that there are no stars in the sky. (See all Apollo images).

But there is a very reasonable explanation, the cameras that the Apollo mission used, had manual light filters, (a bit like the pupil of your eye). The Sun reflects off of the moons surface and the white suits of the astronauts. Making both exceptionally bright, while the stars (because they are so far away) are quite dim.

The cameras on the Apollo mission would be set at a bright setting, so the moon and the astronauts are visible, but the stars are missed because of the flood of light, from the moon and astronauts. 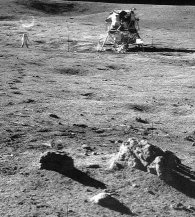 For example, in the two images to the right, the shadows of objects are in different directions. (In fig one the Landers shadow is pointing east, while the rock shadows are pointing south-east). The conspiracists explanation for this is that more than one light source is shining on the moon, a trick used by movie producers, to highlight certain areas. But common sense then tells us, that there then should be more then one shadow. For example, football players have multiple shadows while playing on the pitch, because of the multiple lights cast upon them.

Instead these bent shadows are caused by the uneven ground of the moon surface, if an object is on a hill or a slope then the shadow will ‘bend’ into the incline. Brilliant pictures demonstrating this can be seen at GODDARD’S JOURNAL under Are Apollo Moon Photos Fake?. You can try this yourself, with a bucket of sand, two poles and a light source.

There’s also a different conspiracy theory about the bent shadows. It is said that the different angled shadows, come from one long artificial light. This could possibly work, as movie lights do cause that effect. Though it is more likely to do with perspective. If you viewed the landscape from a bird’s eye the shadows would be parallel. Though, the conspiracy theorists explanation could work.

Thanks to Aulis, for bringing this to my attention