The most consistently seen argument of moon hoax believers, is why, in a land with no air, the American flag stands up and waves, instead of falling down to the ground? And yes, if you look closely at the moon flag video clip, (Realtime player required.) it does appear as if Neil is fighting with the USA flag. But, if you look even closer, you can see that the flag is only flapping when Neil is holding it, and trying to twist the flag into the ground. (You can’t see this that well because of convenient editing.). Because of this the flag waving can be accounted for by Neil twisting the pole. 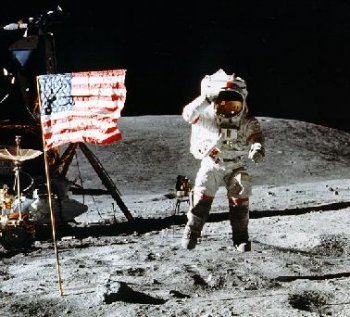 But the conspiracists also say that there are at least one photo, where the flag is flapping and the astronauts are no where near the flag. The explanation for this is simple. NASA’s flag was on an antenna, connected to the pole which pulled out like a radio receiver. At Apollo 11, the antenna wouldn’t pull out all of the way, causing a ripple which looks like a waving flag if taken through a camera. On later missions the flag wasn’t pulled out all of the way because it looked better.

But the most publicly advertised hoax conspiracy is the Coke can hoax. A woman called Una Ronald was said to have spotted a Coke can bounce along the floor. Left there are some frames of the video. The supposed “Coke bottle” is shown highlighted. 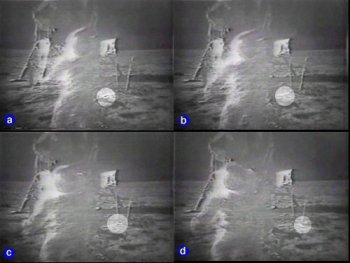 Even though it doesn’t look much like a Coke can – as it can be barely seen on still photos – it is still something. And that something is light. In this clip Neil is demonstrating the bunny hop (a kind of walk) and he’s moving from left to right. What is happening, is the light from the sun, is reflecting from Neil’s visor and showing up on the camera. The visor and the Coke can is shown with purple dots and connected with a yellow line, the middle of the screen is marked out in the blue lines.

If you see the yellow line crosses the center in every picture. This anomaly is called a catadioptrism, or ghosting and you can see several cases of this in the Original Apollo Moon Landing Film.

If you look at the film closely, another example of ghosting is shown, as half of the time there are three astronauts running around on the moon. Also the ‘Coke can’ appears twice in different places, and it doesn’t make sense that there was two Coke cans on the moon, both slipping detection. Also if you freeze the frames with the Coke in shot, you can see that the can is bent in different places at different times!

But many people will argue, that the reason why you couldn’t see the Coke sign and the can is bent, is because the video is too low a quality. Which in itself is a conspiracy.

The theory is, the video was low quality on purpose, to stop critical analysis, but there is a another, more reasonable reason. The first plans for TV broadcast, was a giant satellite dish set up on the moon by the astronauts. NASA wanted to record the first step on the moon, but the dish would take to long to set up, in the short amount of time they had, so the small transmission satellite dish on the moon lander was used resulting in lower quality images.

This section was supposed to be much larger, but I couldn’t find much original footage that hadn’t been tampered with. (i.e. convenient editing) or the full film. So I can’t explain all of the video arguments the conspiracists have presented in full.

Well if you didn’t believe it was a big government conspiracy before watching the video below, you will afterwards. It’s very funny :)